Contrary Thinker “beware of froth, its time to sell and hedge.”

At the end of May, the old guard was crowing about the completion of a head and shoulders top. Cramer and associates plus a chorus of perm-a-bulls started to become bearish when the market gapped lower. I pointed out that traditional TA could not make that call with a higher chance of success than 50/50 because the break would not get carry over without consideration of the context behind it.

I pointed out that the short-term background had the market’s May decline labeled old, laboring and due for a change on June 2, and the breakdown of the head and shoulders was a trap. And now the man who would be a guru says the market is frothy. Well, he is right, but he is still a perm-a-bull. Here is what he was quoted as saying:

“…watch now CNBC’s Jim Cramer said Monday it’s a tough time to put new money into stocks, even as the market posts gains. The Dow Jones Industrial Average added more than 78 points Monday, the S&P 500 expanded 0.47% and the Nasdaq Composite moved up 1.05%. Cramer said investors […]  Click here to view original web page at Cramer: Beware of froth — ‘it may be too late to put new money to work’

Well, there may be a leak in my membership, which is talking to Jim’s TA, that can be fixed. However, all of the primary stock market averages on Monday hit panic buying extreme. My Technical Event Model reached a rule #1, an extreme that calls for a change of trend because of emotional buyers are easy to flip.

The chart here also reveals that time cycle flipped on the Dow ( and others ) to the short side at the low – the odds and other risk/reward stats for this 100% time and price based strategy is on the left-hand side, and there is no money management used. It’s purely technical.

With the markets in a state of panic buying, aka FOMO, and cycles pointing lower into the end of June, ContraryThinker believes that Cramer is right that the market is frothy. However, it’s just not the short term, it is also the Intermediate and Long Term context that supports the downtrend from late April.

We Are In Worse Shape For A Recession Now

Click here to view the original web page at Stanley F. Druckenmiller “We Are In Worse Shape For A Recession Now.”

Stanley is someone who takes what the legends know literally, as opposed the 99% of all the social media garbage you read, esp on Facebook and Twitter.  More on that in a moment.

However, January 18, 2018, Market Map told you what  Mr. Drukenmiller is saying now, no harm no foul stocks have done nothing since that date!

And in the   January 23, 2018, in my MarketMap 2018 update, I said ” …the market is in a cluster of time windows likely to lead to a high pivot price, confirmed by a sizable decline %5 plus – established by our big swing (multi-month) systems sell (taking profits) and sell short signals before the end of the month. ” Just three days from the first of three peaks in the topping process.

“The scenario was for the failed new high in late August early September, but as the January COT date was early by ten days. Now it looks like the peak will come at the end of the calendar month leading to a sell-off into mid-November.”

In the Volatility Report dated September 24, 2018, posted this table with dates for the peaks; and the maximum for the Dow was 10/3/2018. I concluded that brief expecting:

This topping process has been a gift, with the third peak hitting as a failed new high by the Dow.

I laid it out this way ”  Traders should be on their toes for signs of a pivotal high going into the next change of trend window ideally on May 6 +/- 2 days but the leading edge on the 29th of April. Next Tuesday. Until that time, low volatility.”

The various significant indices peaked from April 29 into May 1 for the NASDAQ  and declined 7%, into a Short term low pivoted on the first working day of June.

“From an EWT point of view, the decline from the late April early May peak may have just now finished off its first S-T leg down, allowing for a retracement of .236 to .382. ”  I said on June 2, but the rally has been a high rate of change affair that my volatility model – TEM – supported for the three months downtrend at the time. However, the rally did not match the kick off surge back at the beginning of 2019. The type of momentum surge that Marty Zweig discovered to lead to more advancing markets. But this June rally has failed to live up to  same big “internal bullish ratios.”

The Bulls have one more day to give it a go because the markets are up against it now. Regarding Stanley well: What you learn from the great ones is good risk management is not to take a risk. Again 90% of managers hear that has rhetoric, just words. Where in, it is the truth that any good card player will tell you, if you don’t have the cards to win, don’t bet on the “if come.” And when you are on a winning hand, you go for the juggler.  Just ask Stanley, who is now in cash or kind.

My Alternate for a roaring 1929 style end to it all: “This Bubble’s Gonna Be A Big One… Real Big”

Last Friday, when discussing the potential consequences of what would happen if the Fed cuts rates, and why BofA believes that such an act would represent a huge risk to the market and economy, is that following the May slump, the foundations for the S&P rising to 3,000 in […]

Click here to view the original web page at Hedge Fund CIO: “This Bubble’s Gonna Be A Big One… Real Big”

Volatility Reports published this alternative chart on May 4, 2019.

With a change of trend date occurring now and prices advancing into them, a peak here is necessary for the 1929  style rally into the autumn to remain an alternative. and for prices to continue their May-Walk-Away. 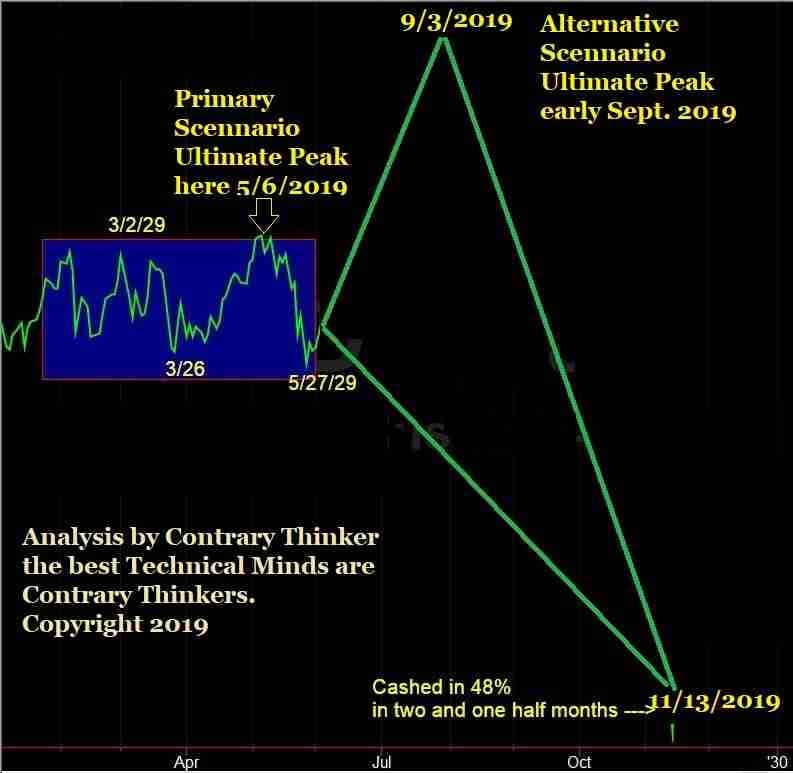