Risk Opportunity Assessment and the Timing of Change

13 Factual Excuses for the Next Crisis

The inevitable next crisis

“The order of the current problems laid down below is random. Hard to say which factor will be the next catalyst. Maybe all or several at the same time? Decide for yourself. 1. Unresolved political conflicts. Ask yourself: which conflicts have been finally resolved since the 2007 crisis? In the Middle East? In the Balkans? In the former Soviet Union? (in Ukraine, the proxy war of the EU against…”

Click here to review the article on 13 reasons for a crisis.

After the market goes into the new bear market and it’s clear to the media and the pundits that they need to make excuses there is always an abundance of bad news to choose from. It – the bad news – never goes away, most of the problem that existed back in 2007-08 are still there and a few have been made worse. So while the media is lazy and it is hanging its hat on the trade war, because anyone who graduated from high school recalls that a trade war is not good for the economy, it will not be the reason for the climactic action that will be there for sure when then bear market ends.

If you’d like to review of 13 reasons why the stock market should finish its topping process and begin its clear downtrend now, here is a link to the article. Click here to review the article on 13 reasons for a crisis.

Since December 2017 my headlines for the back story would be reason number 14, not given in the above brief, which is the political issues at home. As in a constitutional crisis right here in the USA.  The Dow will be the best barometer regarding the balance of power between the three branches of our democracy vs Trump’s authoritarianism and his popularity.

Forget Rates, The Fed Is Still Quantitative-Tightening At A Record Pace

“Authored by Wolf Richter via WolfStreet.com, Where is the Fed’s “U-Turn” that Wall Street promised us? In June, the Fed shed Treasury securities at the slower pace announced in its new plan for QT, but it dumped Mortgage Backed Securities (MBS) at the fastest rate since the QE unwind started, breaching it’s “up to” cap for the first time. And it is experimenting with the opposite of …”

Click here to view the original web page at Forget Rates, The Fed Is Still Quantitative-Tightening At A Record Pace

The back stories and the media spin are in conflict. The media touting the Trump’s arm twisting of the Fed Chairmen Powell and Mr. Powell simply paying lip service to not hiking rates while the central bank continues its Quantitative Un-easing, that is shoring up the books. That reasoning touches a number of markets, including the commodities, which continue to look “deflationary.”

What is clear about the 30-year Government bond is a panic top. The long term (L-T, monthly) chart at the end of its (C) wave hit an extreme measured by the Technical Event Model (TEM) that clearly indicates the buying was poor or emotionally based. As in fear of missing out and these buyers will be easy to flip. The panic buying shows up on the Short Term (S-T chart) in the right-hand window from 149 to 155.  The bullish support level is highlighted in Teal from 143 to just under 148. That support area assumes more bull market, but Contrary Thinker sees the peak in 2016 as the primary high pivot and a bear market has begone.

The S-T TEM supports the expansion of the daily high/low range, traders should expect more long daily bars. The market gave an S-T sell signal on its break down from new support zone, annotated in the chart. The weekly chart shows the uptrend (C) ending on a typical TE#3, calling the uptrend low energy, dull, persistent and due for a change.

While it may be traditional to tie the Aussie buck to commodity prices, its economy has yet to make the transition to a more diversified one and is a major exporter of every commodity one can think of and is from a natural resource point of view – self-sufficient. The inference is that the AUD marches in lockstep with the CRB and other commodity indices.

The long term charts above have long term tidal cycles on sell signals and the bar charts breaking below trend line support. Both markets are working off a background that supports a forceful pro-directional trend, that is today is down tomorrow will be down and so on.

The outlook is deflationary.

China continued its renewed (public) gold-buying spree in May adding another 10 tons of the precious metal to its reserve – the seventh month of buying in a row. “It’s a diversification away from the U.S. dollar, particularly given the trade tensions and the potential technology cold war that’s evolving,” said Bart Melek, global head of commodity strategy at TD Securities. “We have to remember that gold is nobody’s […]

The assumed or traditional inter-market relationship with gold and the other markets infers that gold is the store of value when the dollar goes to hell, or its the safe haven when there is an international crisis or monetary inflations. I can say that at least on a short to intermediate term basis these old relationships do not hold up.

In otherwords, gold can rally and the dollar can rally. The USA central bank does not have a corner on the fiat currency inflation and the EUD is just as much the product of the printing press as the buck. And as a reminder, gold is denominated in USD for all of the EURO bulls out there, after 30 years of a bear market, maybe the mega-rich in the USA want their buying power maintained, remember its “America First.”

But let’s talk about gold here. Contrary Thinker is long term bearish. However, the chart below and our comments for the Intermediate-term basis was rabid bullish expecting a post triangle run up to the $1,600/oz level in a matter of weeks or a month.  An advantage Contrary Thinkers have is the knowledge that there is nothing magical in a price level, that the condition – dynamics – before and after a break is telling. 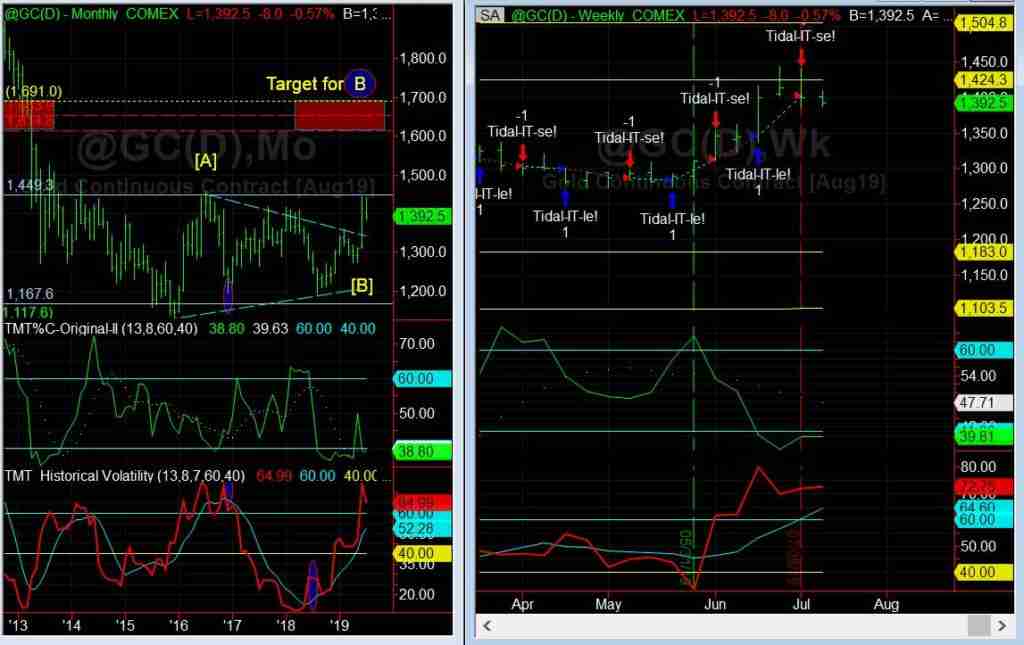 I said in the June 23 Volatility Report ” However, I can refine the targets now that the direction looks 99% certain. There is a cluster of levels projected by different methods starting from 1625 to 1692.  Reachable by golds next COT date.”

However, the action recently lends some doubt to that expectation – the sentiment of many gold prognosticators has been toned down, but that helps the contrary point of view and the rest of it has not killed the I-t bullish call.  I also said in that letter that all “risk assets are in gear now.”  So from the Bitcoin to gold to stocks, the trend is up into late summer early fall, with Bitcoin being a bellwether.

The longer-term charts above show the breakout generated “panic buying” – TE#1 red vertical line – and that technical event 90% of the time leads to a change of trend – from up to down or up to sideways. Thus far the rapid advance is building a high-level base for its next run-up. The I-T weekly chart on the right shows time cycles flipping over and that the market failed to hold L-T new support zone – 1450.00. That is the low side of L-T resistance and the old high. A move above it is the minimum expectation for the post triangle run up to be complete, but that did not happen yet that failure has not been met with the dynamics trader’s expect after a failure, a bullish sign.

Contrary Thinker sees that traders will not need to wait much longer for the trend direction to reveal itself. The S-T charts below reveal that my volatility model -TEM- is at a new S-T extreme, a Technical Event #2. such events in the majority precede a period of breakout and directional behavior.  For newer members, context is direction neutral. Rather it forecast market dynamics.

The chart on the right shows that at the recent top both momentum indicators are in gear with each other, hence no sign of a meaningful peak. Plus today they are both bull market oversold.

The intraday chart – 90 min bar – has a set of day trader fixed bands wrapped around it. Therefore, with the S-T background at a high tension extreme, a break of these bands should get carry over. There are many bands available traders can use here. but our point is that long term trends start with an intraday trend. The chart in the middle has the S-T fixed S&R for the larger buy/sell direction signal.

CT’s bias is S-T to I-T bullish.  I welcome questions and feedback, I remove cynical comments and trollers.

— Contrary Thinker does not assume the risk of its clients trading futures and offers no warranties expressed or implied. The opinions expressed here are my own and grounded in sources I believe to be reliable but not guaranteed.

— Contrary Thinker does not refund policy all sales are the finale.

NO WARRANTY / NO REFUND. Contrary Thinker   MAKES NO WARRANTIES, EXPRESS OR IMPLIED, On ITS PRODUCTS AND At this moment EXPRESSLY DISCLAIMS ANY AND ALL IMPLIED WARRANTIES OF FITNESS FOR A PARTICULAR PURPOSE. IN NO EVENT SHALL CBI BE LIABLE FOR ANY DIRECT, INDIRECT, SPECIAL, OR CONSEQUENTIAL DAMAGES IN CONNECTION WITH OR ARISING OUT OF THE PERFORMANCE OR USE OF ANY PORTION OF ITS PRODUCTS.