The collection of the Twitter posts from Friday and Monday rank sentiment at an extreme bullish level with  72% bulls, 23% equivocal, and  5% bearish, suggesting the buy dip mentality remains for  Smart Monday profit-taking liquidity.

I labeled the equivocation segment based on the content provider simply posting a chart without drawing a concise conclusion while one was intimated, all of them bullish, leaving this contrary thinking indicator at 95% bulls.

Coming into this time window, both MarketMap and Volaltity Reports has put advisors, managers, and traders on alert, that any rally unless it was a momentum surge would stall and the bear market will reassert itself. The rally over the last two trading days were not A/D surges.

In fact, while the old school may be looking at arbitrary definitions of bull, bear, and corrections, what Contrary Thinkers can gain confidence from is the occurrence of any long bar day decline that exceeds the widest one day range since the peak September 2, 2020.

For the cash S&P, a long bar decline greater than 4.4% or 148 points will confirm a long term bear market, for the Nasdaq Comp a range day decline larger than 6% or greater than 670 points from the day high to low, would be long-term bearish.

This has nothing to do with the arbitrary definition of a correction being anything less than 20%, and normally 10% give or take. It has to do with the lack of panic near the top of the bull, which after a certain number of days from the all-time high gives great confidence to the bears.  If between now and the opening on Monday the market has not had a panic with all of its earmarks and without a buying momentum surge, by historical standards the market has slipped into a long term bear that will last on average 18 months and cash in 36% in profits on average.

Fed impotence shifts power to politicians, can you afford the risk?

Contrary Thinker’s strategy is clear, its the process between short and long volatility

S&P 500 implied relative volatility is at new highs in the face of a 45% bull market by the underlying index. The level of VIX has been increasing as a bull market in fear is making new highs with the S&P new highs. The last time this technical event occurred was in the late 1999- early 2000 high pivot. So Contrary Thinker (CT) is clear the horizontal axis is the S&P price level, and the vertical axis is the VIX price level.

There is more volatility in the background with the presidential election coming up on November 3, 2020.  Historically, election-day changeability implies a swing higher or lower of 3% S&P and 3 1/2% Nasdaq.” Sources have these historical swings on a higher range of “change” expecting 2 ½ times the recorded amount on election day +/- a day. 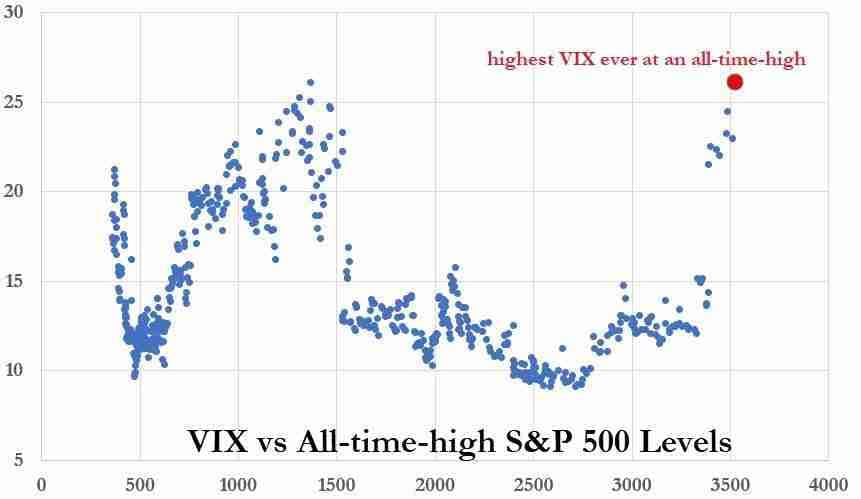 If that is not enough, there is more that leaves the informed capital managers and advisors uneasy. While many continue to believe everything is back to normal from the economy to politics, the elite see a major disconnect between economic fundamentals and the stock markets. Hence, they are uncertain and searching for protection.

Why many market participants fail is by not understanding their own biases – like being fully invested all the time or believing asset allocation – some form of diversification – will provide Alpha.

Contrary Thinker at the end of 2017 – the lowest volatility year on record – began anticipating a transition to a far more volatile regime. At the end of 2017, I published my concerns and called (Market-Map-2018 1/18/18) the first quarter mini-crash in 2018 as a Regime change.  From that point forward, the market’s been a foghorn saying here it is, and yet, “short volatility” remains the idea to achieve Alpha, when faced with facts.

At that time, a regime of higher volatility appeared inevitable after 20 years of Neo-Liberal economics into 2000, and another 20 years of monetary interventions evolving into “preemptive monetary policy all of which left “The System” to be a ward of the State.

While the legends like Druckenmiller and Soros underestimated how the Fed can lift financial asset prices, they along with other independent capital managers and advisors also see the Feds impotence in its ability to stimulate the real economy. An inability that has unfolded over the last 20 years.

This is not a political point of view. It is part of a database of facts that everyone aka risk analyst/managers needs to work from. A fact like the wealth gap, to note a more noticeable result of the Fed failing.  It is this growing impotence that widened the chasm between asset prices and the real economy, simultaneously amplifying the wealth/income inequality and financial instability—the “disconnect” as it is being called in the social media.

The Fed understands this, Powell is increasingly calling on politicians to support monetary easing with increased deficit spending, aka monetary/fiscal coordination.

This Federal Reserve’s incapacity, as describe, transfers power from the central bankers to politicians. How does that shift impact your risk analysts? In context, how does that influence your risk management in a “contentious” presidential election year? Where streaming social media has the presidential race between a Communist and a Fascist.

The flip side on the curve, with fiscal deficit spending determining the pace of economic growth, imports greater volatility into the system. Why? Because it is in the hands of politicians who, as their prime mover, may only have their seat of power considered and their “dreams of grand legacies.”

To be clear about tail risk, a change of parties on November 3, which inherits trillions of debts where small-dollar interest rate changes have little incremental real impact on economic growth. Thus, a move back to a normal focus on the economy vs “share-holder-capitalism – will lead the economy into recession and a dominos effect of defaults by States and significant businesses.

On the other side, where the core of power remains little change, the government’s fiscal and monetary policy coordination is applied to obscure – monetize- the problem and eventually deflate the dollar and in an attempt to inflate paper assets and bury the financial problem. Risk cuts both ways.

Great and Many Thanks

— Contrary Thinker does not assume the risk of its clients trading futures and offers no warranties expressed or implied. The opinions expressed here are my own and grounded in sources I believe to be reliable but not guaranteed.

Cycles began to flip over on Wednesday as the market realized and continues to find its form over the next five to six weeks.

Our table of Change of Trend Dates (COTs) has been updated with new data. One is from a friend of mine that is also a respected competitor, the other new column on the right comes from a new study based on Lunar Nodes first propagated by financial astrologer Louise McWhirter work in the early 1900s. Her 18.6-year cycle is already part of our longer-term work but I have reduced it to the short term because I found it produced dates that clustered with other independent cycles. END_OF_DOCUMENT_TOKEN_TO_BE_REPLACED 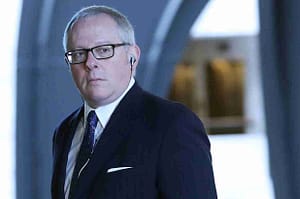 “The top spokesman at Health and Human Services accused scientists at the Centers for Disease Control and Prevention of “sedition” for their response to the coronavirus pandemic and warned people to buy guns and ammo because an insurrection led by Democrats could start on Inauguration Day if President Trump refuses to “stand down,” according to a report Monday.”

The outside world: Is there help for the markets (aka the new economy) coming from congress? ” Morgan Stanley No Longer Sees A Fiscal Stimulus Deal Before The Election

A landslide for Joe Biden resulted in a relatively orderly transfer of power. Every other scenario we looked at involved street-level violence and political crisis.

Everyone is focused – since 2017 – on the tax cuts, the share buybacks, the pre-emptive monetary policy, the Fang boom, work at home boom, and a recession with numbers as bad as the 1930s in the face of a proclaimed “V” shaped recovery.  Hey crazy man, crazy, right?  No, the market is never wrong and it is the economy now and what will the monied interset discount?  Our system of government.

Keep telling yourself, it is only a TV reality show, its only reality TV

“Stone recommended that Trump consider several actions to retain his power. Stone recommended that Trump appoint former Rep. Bob Barr (R-GA) as a special counsel “with the specific task of forming an Election Day operation using the FBI, federal marshals, and Republican state officials across the country to be prepared to file legal objections and if necessary to physically stand in the way of criminal activity.”

“Stone also urged Trump to consider declaring “martial law” or invoking the Insurrection Act and then using his powers to arrest Facebook CEO Mark Zuckerberg, Apple CEO Tim Cook, “the Clintons” and “anybody else who can be proven to be involved in illegal activity.”

The GOP Is Staging Chaos On the Way To a Coup

Today 9/3/2020 the markets are flashing “DANGER” and no one is paying attention, NO ONE. Today 9/10/20 the majority continue to find a rationalization for more bull market.