“This is it make no mistake where you are..”

While the bulls could try to pull an Easter bunny out of their hat, the Contrary Thinker does not see their ability to do that here.

the top chart of the SPY has the diffusion index under it which measures the new numbers of new 52-week highs vs new 52-week lows. This chart shows the number of new lows is growing while only the old folk’s sentiment indicator – the AAII’s Investor Sentiment Survey – is from a contrarian point of view bullish, plus it is a survey not measuring actions. 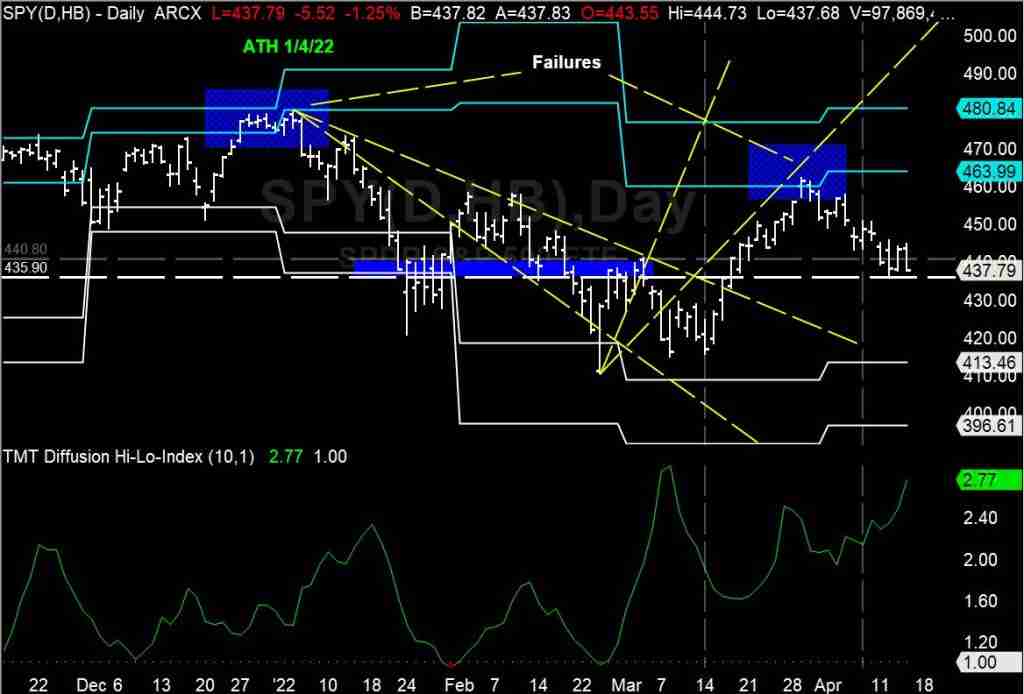 The above chart shows how at ATH the SPY failed to break into and hold I-T resistance, what followed is the typical harsh penalty the market takes after such a failure. Again on 3/29/22, the market failed to hold and more bear market action is expected.

There are a number of ways – both geometrically, mathematically, and astrologically – that pivot support is just below the closing levels of Friday.

So, the internals of the market supports the sellers in the “Great Cash In” and the best the bulls can pull off is their rotational correction which happens to be from the old leadership into defensive high yielding stuff. As membership knows and my Trade Markets App traders know, Contrary Thinker is all over that.

If you did not see it last week, the longer-term high-quality bonds are in a panic sell-off, with more to go. Stocks do not like the competition, which it has now both from rates in less risky investments and from the booming economy for capital investment and other tangibles.

The chart featured here has lots going on with it, but should be clear to our membership is the clear downtrend being traced out by the 200 DMA and its 4% filter. Also, because Contrary Thinker feels that a better-educated member is a better advisor/trader one of our first rules is that all trends are 360*. From the peak on 3/9/20, the trend was a complete 360* on 3/18/21 and reached another 360* in mid-February.

The chart projects an S-T pause, a time frame for backing and filling in mid-May to late May.

I am not real keen on touting existing profits, leave it to say our traders are doing well trading the short side of the bond market. Like the underlying 30-year futures, the 10-20 year ETFs are in free fall panic pushing the various bear funds higher like TBT.

The breakout on the monthly bar of the 45* angle trend line is massive and accompanied by big volume, I wonder who? 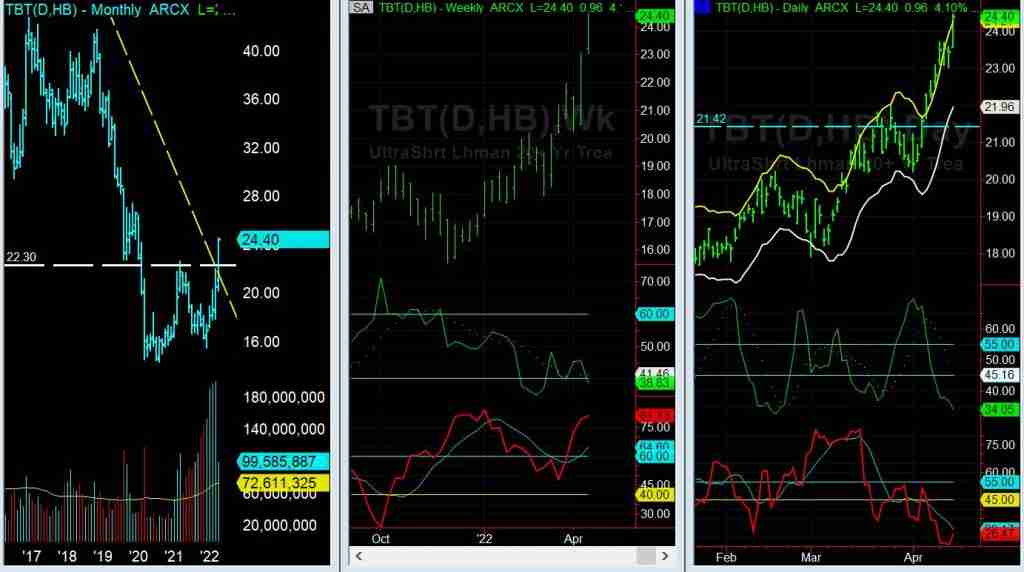 The three primary stock averages in the daily charts shown here reflect the breaking down of the uptrend, now trading under their 200 DMA and breaking below the lower 4% band, a signal used by the slower-to-move crowd in Boston, the capital of the mutual fund industry.

More importantly, TEM has a pro-directional trend signal back on 4/7 +/- and has just started to move lower with the underpinning still in place suggesting more decline this week.

EPV is an aggressive inverse play on the developed European equity market. With the use of swaps and derivatives, the fund aims to provide -2x leveraged exposure to the FTSE Developed Europe All Cap Index – seen here in its ETF form –  a market-cap-weighted index of large- mid, and small-cap developed European companies. 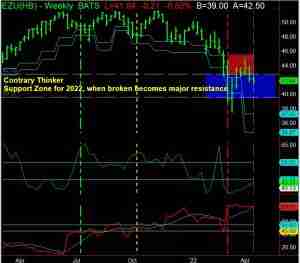 The European market broke down in a hurry into Long Term support zone, hight lighted in blue. What is interesting is the long bar panic low on the weekly chart was corrected during the four-week bounce, to the high of that panic weekly bar. I highlighted as well the high of the bounce called the high and pivot reversal two weeks ago.

The expectation is for it to carry over into its bear trend this week with the rest of the world. If the market provides the risk/reward opportunity, the EPV will be bought.

Its the train you don’t see that will kill you,

“Michael German, a former FBI agent who worked undercover against domestic terrorists during the 1990s, knows that the white power sympathies within police departments hamper domestic terrorism cases. “The 2015 FBI counter-terrorism guide instructs FBI agents, on white supremacist cases, to not put them on the terrorist watch list as agents normally would do,” he says. “Because the police could then look at the watchlist and determine that they are their friends.” The watchlists are among the most effective techniques of counter-terrorism, but the FBI cannot use them. The white supremacists in the United States are not a marginal force; they are inside its institutions…

“Just consider: in 2019, 36% of active-duty soldiers claimed to have witnessed “white supremacist and racist ideologies in the military”, according to the Military Times…

“The right has recognized what the left has not: that the system is in collapse. The right has a plan: it involves violence and solidarity. They have not abjured even the Oath Keepers. The left, meanwhile, has chosen infighting as their sport…

I collaborate will all members and respond to their individual requests. This is a special offer to LinkedIn professionals – in the VR group – who have yet to subscribe.

Country Thinking is about letting go of traditional ways of thinking, the commonplace that no longer serves you well in investing and trading. Building from the truth, from first principles the robust into anti-fragile. Thanks in advance for your consideration, I look ahead to working with you for the duration.

Great and Many Thanks

— Contrary Thinker does not refund policy all sales are the final.

–Futures results are not linear they can be better or worse While confident, CT does not and can not by law make any assurances.

Wall Street has not changed in the past 30 years. It remains phobic regarding the bearish opinion of stocks, it is a “never sell mentality.”

Contrary Thinker gave its first warning on January 23, 2018, and October 3, 2018. The latter of which I received several “kudos” from membership. This advisory gave subsequent warnings on February 23, 2020, and on May 15, 2021, this advisory went “off risk” and remains in that status. It is strongly suggested to at least sell into rallies. I have created a personal hedge fund available on Trade Exchange, which became active just a few months ago. Previously only long dollar ETF and long dollar/short yen ETF. Today it is much more than the actual results shown in the iPhone screenshot.

Along the way, since early 2018 there have been many clues that a major change was on the way. One was the launching of Robinhood and more recently, the copycat brokerage “Beanstox” from a “shark tank” panel member trying their hand at the same thing.

On July 28, 2021, Robinhood sold shares at $38 per share ahead of its public debut on the Nasdaq on July 29, raising close to $2 billion.  A broker catering to “its time to do money” any time, on a bus or “just hanging with your dog.” Well if the “odd lot” theory from the 1920s is valid, a broker doing an IPO for 2 billion marketing to the little guy or gal is part of that contrary indication.

Regarding the phobia, the majority have regarding the selling shares, of all the posts I read this past week not one suggested or hinted to sell. They were either bearish on bonds, bullish on gold mining shares,  bullish on utilities and oil & gas stocks, or bullish on commodity stocks. But one factor is clear the bull bravado has died out, and the poking fun at what they call “Perma bears” has stopped. Well, it should as there is no such animal in “market analysis ” that is always bearish, there are “traders” yes but they go either way – long and short. Sure there have been “end of the world” types but they talk about other issues, not market analysis.

But the Perma bulls – who I  will call the “do not know how to trade mob” have moved into denial mode calling the decline a “rotational” correction. All in the face of market correlations collapsing toward “1.”

This issue of MarketMap-2022 Annual Scenario Planner will provide a Volatility Report with it in order to demonstrate how the two – time and price – interface.

The featured chart here highlights the change of trend date from the trama date that started the ripples.

The change of trend dates (COTs) I have nickname hot spots, but they are the same. Here I am focused on the short term from the highs posted by the leadership FAANG index and its big brother the NASDAQ composite. From the three pivot configuration that made up that top –
the high on 11/4, the low on 11/10, and the final ATH on 11/19 you can see the color-coded arrows of the pivots they projected and their accuracy.

Social media post content and full-length articles remain bullish. One out of ten headlines or titles is a “got to buy something” suggestion; even the bears are buying utilities. The notion of having to be invested all of the time has not abated and until it does the pool of late money buying “something is wide and deep for pockets of big profits to sell into.