An initial list of stocks in sectors the future should favor and based on technical methods are set up for both S-T to L-T trades and investments. 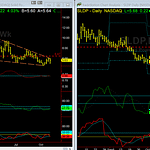 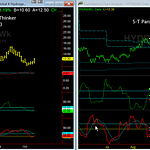 Arlo Technologies is an American company that makes wireless surveillance cameras. Prior to an initial public offering (IPO) on the New York Stock Exchange in August 2018, Arlo was a brand of such products by Netgear, which retained majority control after the IPO.

COMB seeks to deliver a broad, diversified basket of commodities in an actively managed structure. … Utilizing a common structure in the commodity space, the fund’s futures exposure is held in a Cayman Islands subsidiary while the collateral is actively managed with investments in short-term US fixed income securities.

EVGO EVgo is an electric vehicle DC fast charging station network in the United States, with more than 850 charging locations as of August 2022

GRU provides exposure to the following grains: corn, wheat, soybeans, and soybean meal. The composition is determined annually and is announced in the fourth quarter of the current year. The Index Administrator selects commodities primarily on the liquidity and the value of the global production. Each component is rolled into the next available contract month in advance of the month in which expiration of the contract occurs. Although GRU is marketed under Elements brand, the ETN comes with credit risk tied to the Swedish Export Credit Corp.

Nokia Corporation is a Finnish multinational telecommunications, information technology, and consumer electronics corporation, established in 1865. Nokia’s main headquarters are in Espoo, Finland, in the greater Helsinki metropolitan area, but the company’s actual roots are in the Tampere region of Pirkanmaa.

Rocket Lab USA, Inc., a space company, provides launch services and space systems solutions for the space and defense industries. The company provides launch services, spacecraft engineering and design services, spacecraft components, spacecraft manufacturing, and other spacecraft and on-orbit management solutions; and constellation management services, as well as designs and manufactures small and medium-class rockets. It also designs, manufactures, and sells Electron small orbital launch vehicles and the Photon satellite platforms, as well as developing the Neutron 8-ton payload class launch vehicle; conducts remote launch activities; and designs and manufactures a range of components and subsystems for the Photon family of spacecraft and broader merchant spacecraft components. The company serves commercial, aerospace prime contractors, and government customers. The company was founded in 2006 and is headquartered in Long Beach, California.

Talon Metals Corp. is a British Virgin Islands-based mineral exploration company Nickel Copper Cobalt Talon Metals Corp. is a TSX-listed base metals company in a joint venture with Rio Tinto on the high-grade tamarack nickel, copper, and cobalt projects located in the State of Minnesota, the United States. The Company focuses on exploration and mine management team. Talon Metals produces nickel within the United States for use in batteries in electric vehicles.

ZS is a management consulting and technology firm focused on transforming global healthcare and beyond. We leverage our leading-edge analytics, plus the power of data, science and products to help our clients make more intelligent decisions, deliver innovative solutions and improve outcomes for all.

This work by Jack Cahn is licensed under a Creative Commons Attribution-NonCommercial 4.0 International