Everything you see around you came from Man’s imagination and intellect.  So it goes, “in first best dressed!” Flaws and all look at Windows OS. Bitcoin, like Coke, Kleenex, and  Hertz, has the brand.

So anytime you’re referring to a Bitcoin, it could be about the ten thousand other cryptos on the market or coming to market, and with that so ends the limited supply side of the sales pitch.
You need to login to view the rest of the content. Please Login. Not a Member? Join Us

Back on May 8, 2020, Contrary Thinker stated that “… Bitcoin is a risk asset and leads the stock market direction. It is not a hedge.”

While the coin supply is controlled, everyone is a crypto coin miner, creating new digital assets. So Bitcoin is a brand like Coke or Kleenex and a leader, but many, many, many more on the market and many on the way.

A top is in place, and a more decline is expected.

Volatility Report of 4/16/21 did not mix words when it said, “The volatility background provides a setup for a 30% to an 80% fall in the next 30 to 45 days.” That forecast was based on both our timing method and our dynamics model. Our current work expects the decline to pick up speed, not based on some wild guess to get publicity. Rather Contrary Thinker’s methods, which include the curation of social media content all of this is excited about the “new game” on the street and speculating about what it is going to do next and why. All of which comes across as “… throwing it at the wall to see what sticks.”

For the EWT petitioner, the decline unfolded in a nice and neat five-wave structure, calling the larger trend down. Thus far, the decline has only been 25% in a week, which is certainly not the makings of a currency unless the vendors have a wide bid/offer spread to cover their risk and dispose of the digital currency at the time of the transaction. That statement can be expended to all the cryptos as not being a substitute for money.

I would add that it will not look much like a hedge when the profit takers are done. 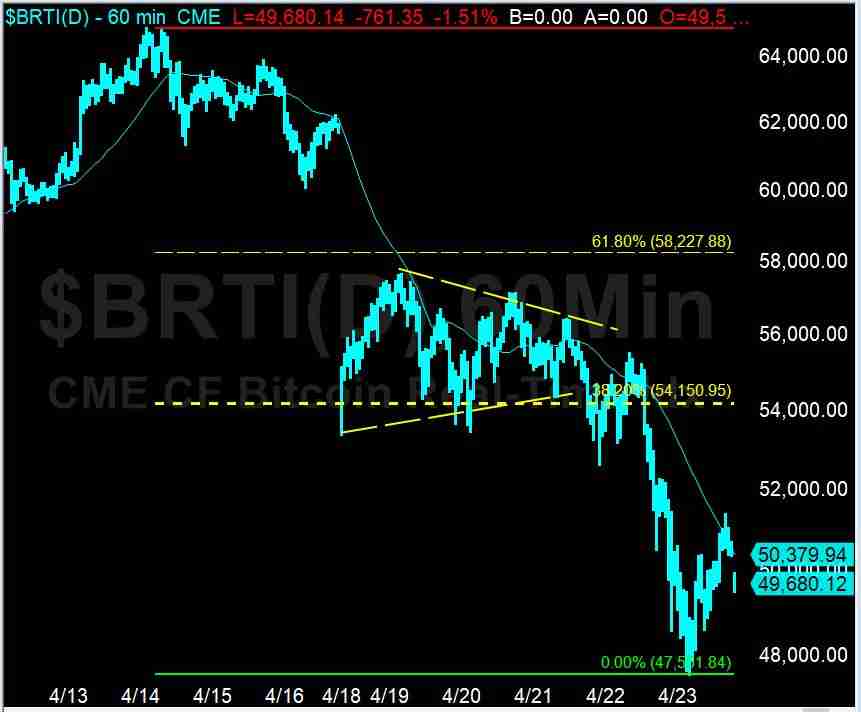 The breakdown level of 58k was taken out on the open. After putting in a near term now at 47.5k, the remainder of the initial targets remain 45k, 39k, 33k, and 25k. The legend of Bitcoin will not go away for the next 20 years. The smoke dream of pennies into tens of thousands was last born in the late 1920s, and the hat cycle is repeating. The question is how many banks – which to all accounts and headlines came to the game late, will have deep enough pockets to hold for the very long term and still maintain client reserves.

It is worth repeating that Contrary Thinker sees BTC as the front runner of ALL “risk taker’s” markets. It is the bell-weather. So goes BTC, so goes the Dow Jones, the S&P, and the world indices.

The featured chart inserted below shows part of our time factor research. The 1 year and a quarter cycle – 65 weeks- began cresting back in January of this year. As with all bullish cycles, it is right hand translated, skewed to the right for its nominal price high, which gives it little time to make it to its cycle low due in June or July.

The bottom line in the face of all the sky is falling Hennypennies, the US dollar is the world reserve currency, and nothing will change that except that the alternatives will look even more fragile. Since the Plaza Accord, the death of the dollar has been the rallying cry for any publication trying to get a readership. After 40 years of neo-liberal currency debasement, the green back-ended its secular bear market in 2011. Today the USA is on the verge of real economic growth, and the demand for dollars for infrastructure will push the USD higher. Plus,  offshore currencies will find their way into this growth, into US capital.

Get the next three issues of MarketMap-2021 – for the time factor. Take the 45-day subscription trial, which includes the eBook of MarketMap’s 2021/22 cycles, the Special Report “Traits of a Market Panic” to make a Fortune PLUS eligible for a long-term discount when you subscribe. 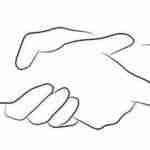 Both publications share curated news media to add backstories that fit with the ongoing market-based research.

— Contrary Thinker does not assume the risk of its clients’ trading futures and offers no warranties expressed or implied. The opinions expressed here are my own and grounded in sources I believe to be reliable but not guaranteed.

The topping of the cryptocurrency brand Bitcoin

The volatility background provides a setup for a 30% to an 80% fall in the next 30 to 45 days. The EWT count looks complete; furthermore, the long-term chart ran from 30k to 60k on panic buying as measured by our volatility model. The advance was all FOMC, which should be easy to flip without a logical base. The current L-T and I-T context call for breakouts or trend following signals to get carryover. Contrary Thinker’s bias is for BTC to signal lower prices. Hence trend following cross under, or breaks below the key level of 58,000 should get carry over. If so, the next stop is 45k, 39k, 33k, and 25k.

Contrary Thinker sees BTC as the front runner of the “risk taker’s” markets. So goes BTC, so goes the Dow Jones.

The Dollar Is Dead; Long Live The Dollar

There are so many false theories and narratives about the dollar and other assets; they are not worth debunking. Advisors and managers should consider the source and the underlying assumptions used to propagate and regurgitate social media content.

To cut through the fog of misinformation, Contrary Thinker listens to the market. The two middle chart windows contain our I-T trend following systems both on buy signals in terms of direction. What gives the most recent buy signal some punch is Technical Event Model’s (TEM) setup.  The weekly bar has %C on a spike, causing a technical event #2, calling for a dynamic trend. The chart on the left is TEM on the perceived risk data, which is on a new TE#2. The last time that happened, there was a 6% move that followed.

The redistribution of the wealth from the very top 1% to the 99%, will not blow out the budget or create monetary-based inflation, not turning the USA into a banana republic. I understand why the majority have a hard time getting their head around this when they cater to people with money. But highly unlikely not anyone in the 1%.

Furthermore, long-term Rooseveltian Economics is not Communism – no centralized ownership of assets –  and has the basis for the longest bull market from 1942 to 1966 / 69 / 72, bubble up economics.

Without such the Euro has an inherent emotional weakness to stay together in times of strife.

The leading indicators for the stock market are ticking off the checklist.

Back on 12/30, the Bitcoin market was labeled a Bell Weather. It should be clear to advisors, investors, and traders that BTC and others are not StableCoin, something that can be used for a more secure currency one that can not be counterfeited. But given the volatility of the market, it is a risk asset. As such, it is a bellwether for other risk markets, it is not a hedge as advertised.

The Bell Weather of the Equity Markets

The Bitcoin backers think anyone who does not believe in it just doesn’t get it—even after eleven years of experience, seeing it run from pennies to nearly $30,000, what’s not to believe.