Higher Rates for Notes and Bonds

March 18, 20 our headline “Hedge the Notes and Bonds and nothing has changed in that outlook

The background for rates is like a high tension act.  Since interest rate volatility measures from its May low worked off into a TE#2, a set up predicting a major trend-based on the weekly chart. That low followed by 11 weeks of tension building where the bulls and bears could not kick off a trend. The coiling up action cycled back this week into a new TE#2, again calling for a forceful trend.

Debt ratios had been looking bad before the pandemic, and today it’s worse. Inflation, which has been a nonstarter for decades may be on the verge of a comeback in a world awash with fiat currencies.

So the credit markets are starting to appear spooked. Volatility Reports sees a number of cracks in the bonds across all ratings. Here is a more complete picture.

Hedge the Notes and Bonds

Risk is about to take on a new attitude.

Gold is in a clear downtrend with no long-term low likely here. The bull market that began with the 9/11 terror attached ended in 2011.  Volatility Reports expects new Geopolitical events over the next two years,  yet gold is not discounting them at this point and remain an “unknown- unknown.”

US Dollar and FX

The bears jumped all over the recent weakness in the greenback, the majority being gold bugs. Their Intermarket relationships to support gold as a haven vs. USD does not hold water in the face of the longterm bearish outlook for the Eurodollar, and the carrying cost of gold.

The contradictory relationship worked from 2001 into 2011 but has stopped with the base building of the buck from the 2008 low to date.

I will not rehash here MarketMap’s change of trend dates and their accuracy so far this year, please refer back to issue #1 dates January 18, 2018.

What I wanted to see after we called the mid-January peak and the type of decline that followed was a test of the January highs with a resurgence of the emotionally based optimism, that occurred in January.

On Feb 12, 2018, I pointed out: “Here is the background traders should expect now that a low is in place for the s-t to i-t.  ,…there is indifference reflected by the public and the media.  Buy dips is programmed into the mob’s behavior. However, smart money…uses the volume of new entrants to sell into.” Furthermore, “Typically, the news is still good, as prices retest the prior highs. Bullish sentiment quickly builds, and “the crowd” reminds anyone who will listen that the bull market is still deeply ensconced.”

I wanted to call it a déjà vu rally, which is only a test of the highs, a failed test. The market had its way and made new highs. An event, however, that negates nothing from a long-term risk management point of view.

The scenario was for the failed new high in late August early September, but as the January COT date was early by ten days. Now it looks like the peak will come at the end of the calendar month leading to a sell-off into mid-November.  Along the way Volatility Reports expects an AOD decline,

Dates for the expected AOD decline are 12-Oct, 17-Oct, and 22-Oct based on the January peak cycle in this century. The annual one-day (AOD) rise or fall is taken as the biggest percentage one-day DJIA movement in the year. For this measurement, the academic research started the year on March 1, and since 1885 some ten major DJIA AOD falls (≥ -3.60%) occurred between September 10 and October 31.

The small tech sector has put a top in, the NASDAQ and the Russell both climbed to new highs from chart patterns that are considered terminal moves.

This picture of the mini Russell futures provides confidence because it did as expected.  Refer to our publication on the Nikkei as it is the same pattern and measuring method. 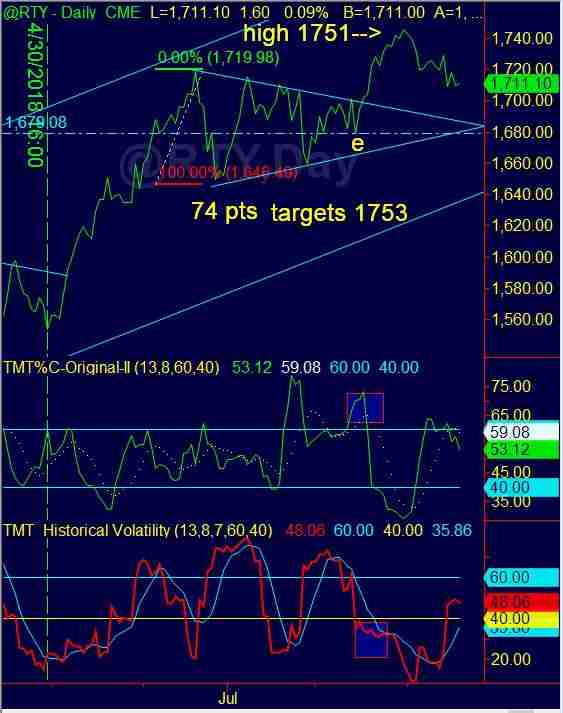 The big cap stock has a little more to go on the upside along with the Nikkei. With that in mind, the background going into this rally was supportive. The Technical Event model signaled a TE #2 preceding the trend move higher by the Dow and S&P.

The chart of the S&P below illustrates how the extremes by %C and our measure of historical volatility – highlighted in blue – lead to a break into resistance and a trending move, which remains in force.

What is appearing to be a top like the January peak is the emotional buying, which is something smart money will not ignore.

Along with the unfinished wave count that will push this market higher, our measures on volatility area nearing readings of panic buying.

If and when reached, alerts will go out to subscribers.

The problem with the bulls waiting for a clear reason to sell is this is the vast majority point of view. Add to the fact that the majority of systems and strategies all have sell signals within the same price range when the signals hit it will be a rush to the exits.

Top capital managers are patient, they endure and wait. When they see a weakness when they are provided the liquidity to exit – given the current risk/reward measured, they will act, leaving trend following for the average.  Single day risk measured by the Dow is 2000 points and risk going into November is at least 4,000 Dow points.

Twelves of the seventeen sectors we follow have long-term sell signals. 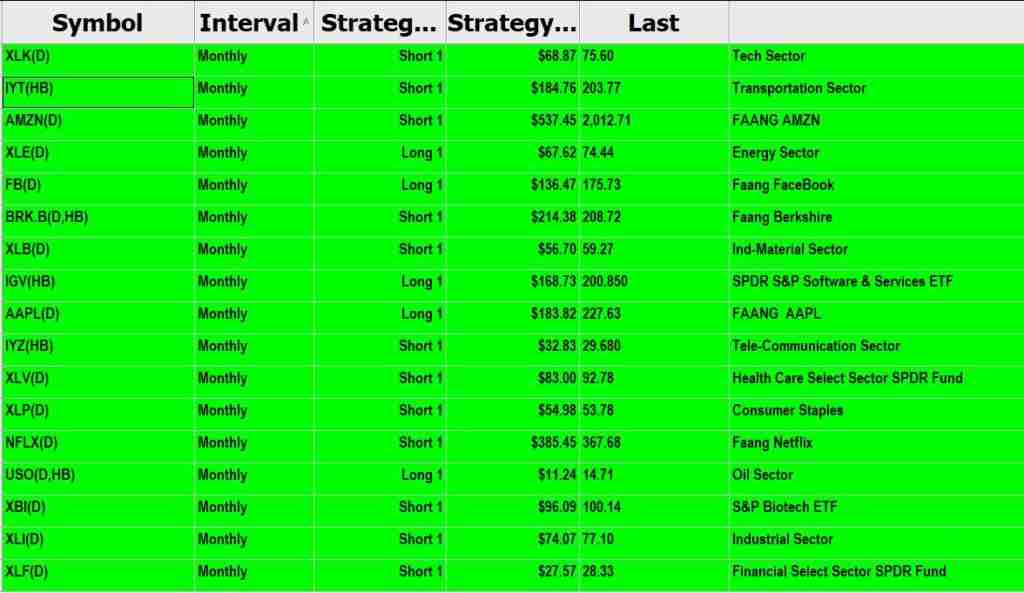 The leading FAANG stocks are following with topping formations. There are long-term sequential sell signals on Netflix and Google plus Apple, Amazone and Facebook are all tracing out head and shoulders tops.

The banks and brokers sector just hit panic buying, and prices are now in long-term resistance, which sets up its success or failure to sustain. Prices need to stay above 74 if the market planes to attempt a break to new highs.

The I-T volatility context supports a low V sustained and persistent uptrend, and the s-t v modeling sees buying into an emotional frenzy. Not what is considered good long-term rational buying.

Excluding the Nikkei and the FTSE, the remainder of the foreign markets are in bear markets are finishing their topping process.  Value type investors are talking about buying China, but on a technical basis they are early, there is no sign of a panic low yet. 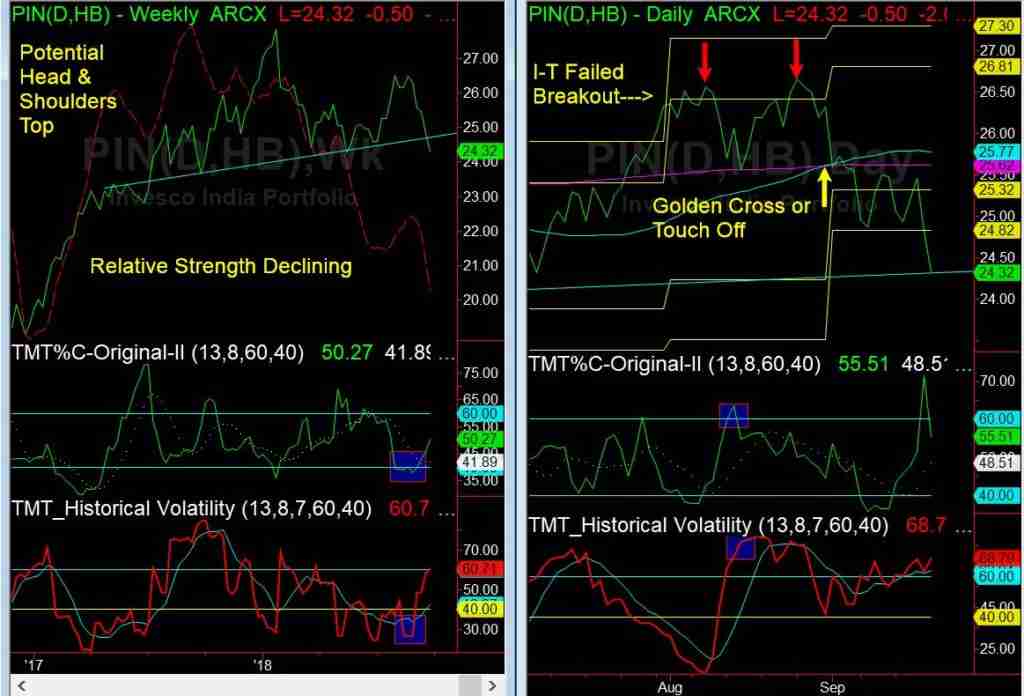 Our long-term strategy – True North – is on a sell signal for all the markets except the Brazillian, where it has caught a counter-trend rally.  The other Bric nations have completed ahead and shoulder top with the opening today breaking the neckline.  This breakdown was a news related event that is sending contagion worries throughout the news media.