Yet, superior performance is rarely if ever stagnant.  Peter Lynch did more than put the Fidelity Funds on the world stage, but he proved that active management works.

It takes guts, vision, and execution after you realize that it is the process of timing the move to long volatility on either end of the risk curve that reduces risk and achieves Alpha.

Simple Question: why take a market risk for an average return?

Crisis Alpha is specifically defined as an uncorrelated return stream whereby the balance of risk and reward is skewed toward heightened market volatility without the constant negative carry associated with always being long or short VX in some fashion with portfolio insurance.

The fund that seeks superior returns through the use of crisis alpha should have a positive risk-to-reward ratio portfolio overall BUT with the best gains reserved for market crashes, such as in mid-2011 and during the financial crisis of 2008.

This may not be the Peter Lynch style and more attuned to a Richard Dennis or a George Soros, but here is what the Contrary Thinker wants its people to understand; and to some degree implement to preserve their client’s capital and achieve superior returns.

To beat the market the advisor, the capital manager, and the analyst has to use to some degree and proportion “Crisis Alpha,” the execution of trades that take advantage of either kind of tail risk.

Such investments are there to make doubles, triples, and better and with small risks based on good timing methods.

Focus on change of trends (COTs)

Bear markets have several distinct features that corrections do not. One is the inability to make new highs in the new year before taking out the previous year’s low. So getting beyond the simple definition of a decline that exceeds 20%, is adding to your body of knowledge.

This featured chart is a good example of a bear market unfolding based on that factor. However, the focus here is a change of the counter uptrend that started on June 16. I pointed out in the group that a change was hitting on Friday. Along with the diverse methods clustered in the COT table below, on this chart of the Nasdaq, the hot spots kicked off at the ATH in 2021 are Annotated on the chart.

They have all been highs except the late April date. The reversal on Friday was also coincidental with our Volatility Model signaling a rule#3, calling the S-T up trend old, feeble, and due for a change. Contrary Thinker does not believe in coincidences. 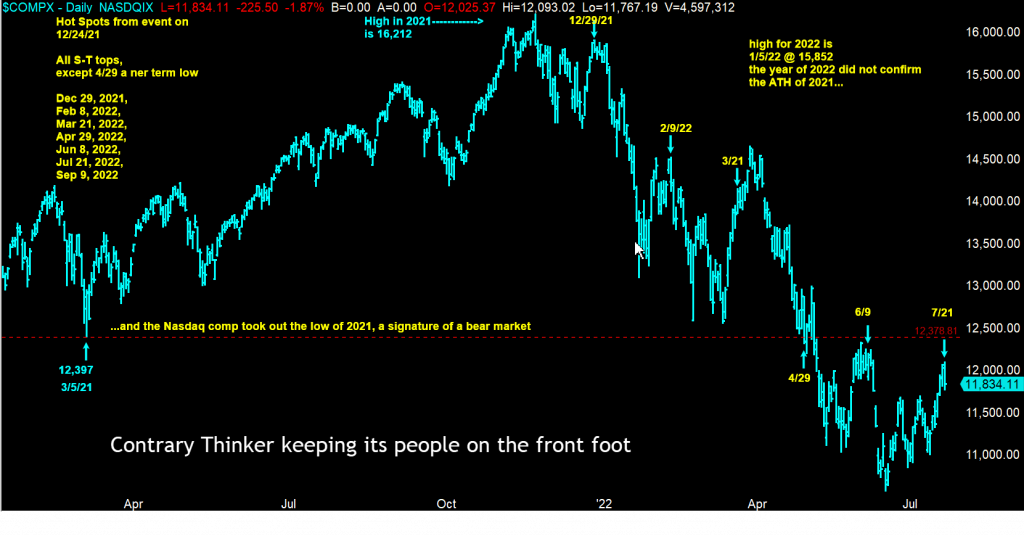 I shared this chart in the group for traders and advisors to have a head start going into the opening Monday. As mentioned in that post, the change will be affecting most markets over the next 10 trading days and there will be new trade ideas on Trade Exchange. 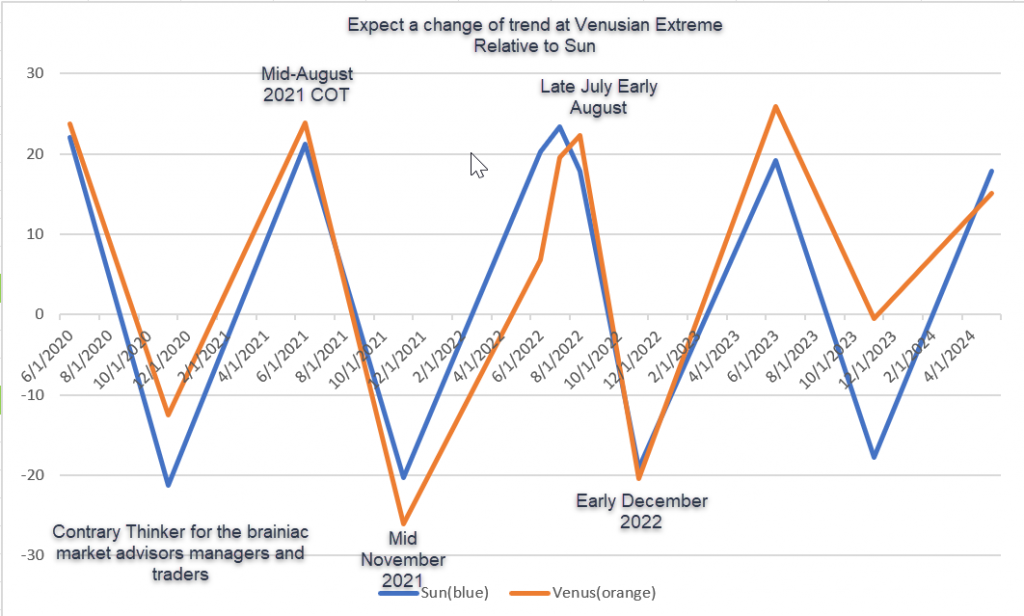 Bradley has really never been widely used or understood, his Son runs the outfit now and was trying the give away for free route early on and today he has realized it’s worth more than free.

The next featured chart is 95% of the model applied for the stock indices. I’ll let you do the little back checking if you like but the key is his model is pointing to a COT here in late July and early August. 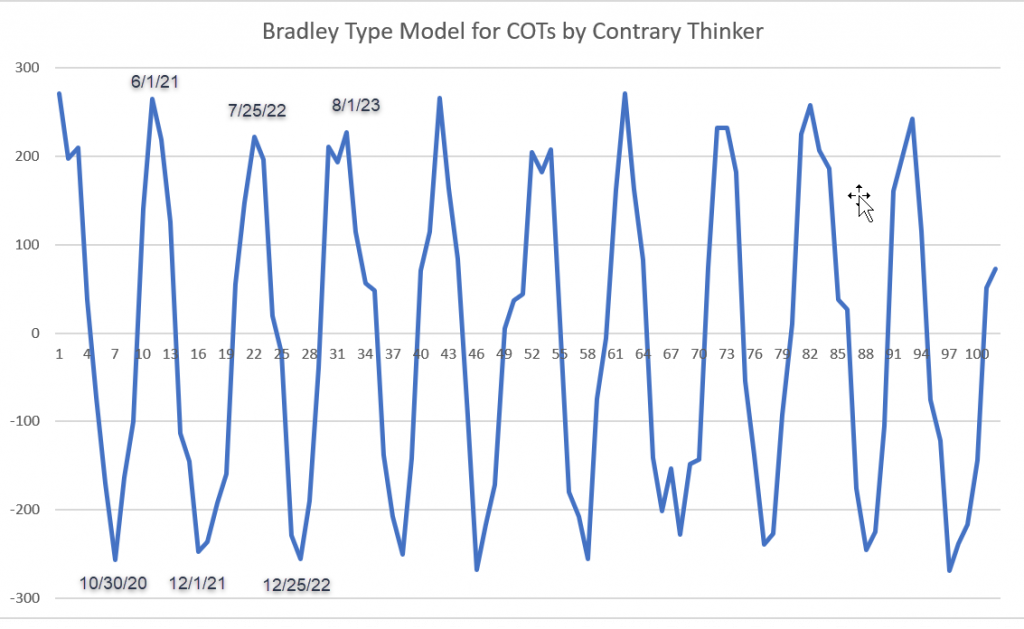 The next featured chart is the crash of 1907

I had a breakthrough over the weekend with the help of a programming wizard. After I did this study and looked at the dates it generated back to 1850, the month and year October 1, 1907, jumped out at me because it was in the fall of the year that did the most damage in the Rich Man’s Panic.  The astronomical event that occurred on that date happens again in early August 2022 fitting in with the COTs expected by several other methods highlighted in the COT table.

Please do not waste your time trying to reverse engineer this one, trust me on that 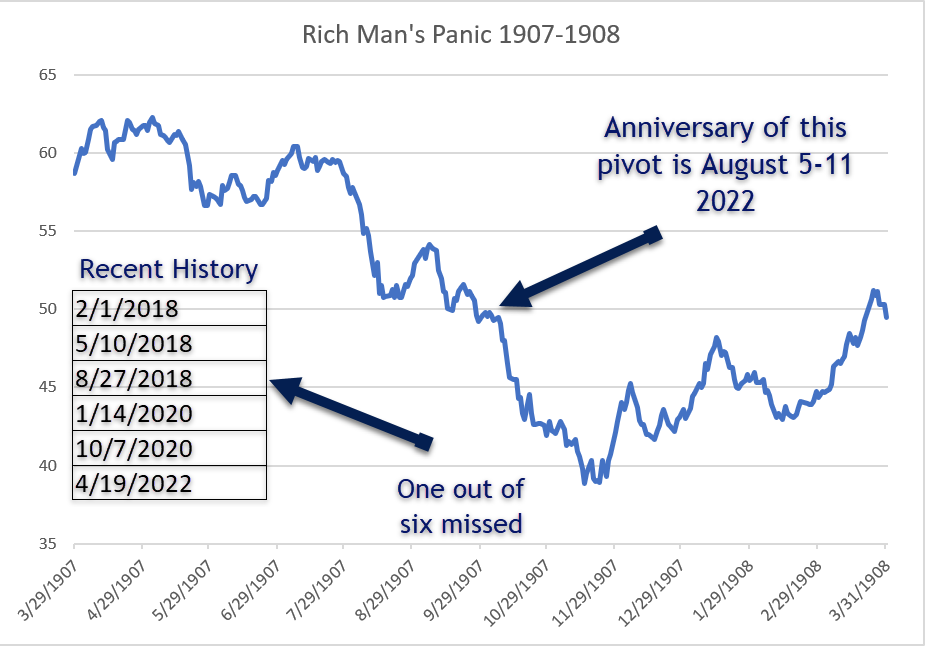 The COT listed below in Mid-July was expected to invert. TEM provided rule#2 calling for an acceleration of trend after a breakout or a new trend following the signal. As posted the lows on the 14th were seen as the acceleration point of the larger downtrend. Instead, the Dow & Co rallied to new recovery highs into the next series of COTs 7 days later on the 21 of July.

Sometimes it is worth repeating that for trends to exist, oscillations need to invert. Hence if the downtrend is valid, and all evidence from, the trend following EWT to momentum internals, to short Volatility extremely oversold, and bullish sentiment from a contrary point of view supports the bears, the low on the 14 should function as an acceleration point.

When that low failed to hold the full 45-day cycle (6.5 weeks) should take hold, take the decline into the COT low due the week of September 5. that would blow through the COT low projected for August 12, the 3.25-week cycle

The reversals lower now will lead to long bar days between Aug 5-12 that exceed anything previously. By that, I mean from high to low the day’s range will exceed the longest declining long bar into that time frame.

A few events were moved or edited but not much. A COT is expected regarding precious metals, currencies, foodstuff, bonds, and the stock markets both here and offshore.

Trade Ideas on your smartphone, for $10/ month plus a profit-only incentive.

From an EWT point of view, the counter-trend is completed in textbook form and is tittering on a cliff. What you will see on the S&P chart below is a bar chart structure that looks like this textbook example from a real market. This textbook example fits the scenario MarketMap is expecting now. 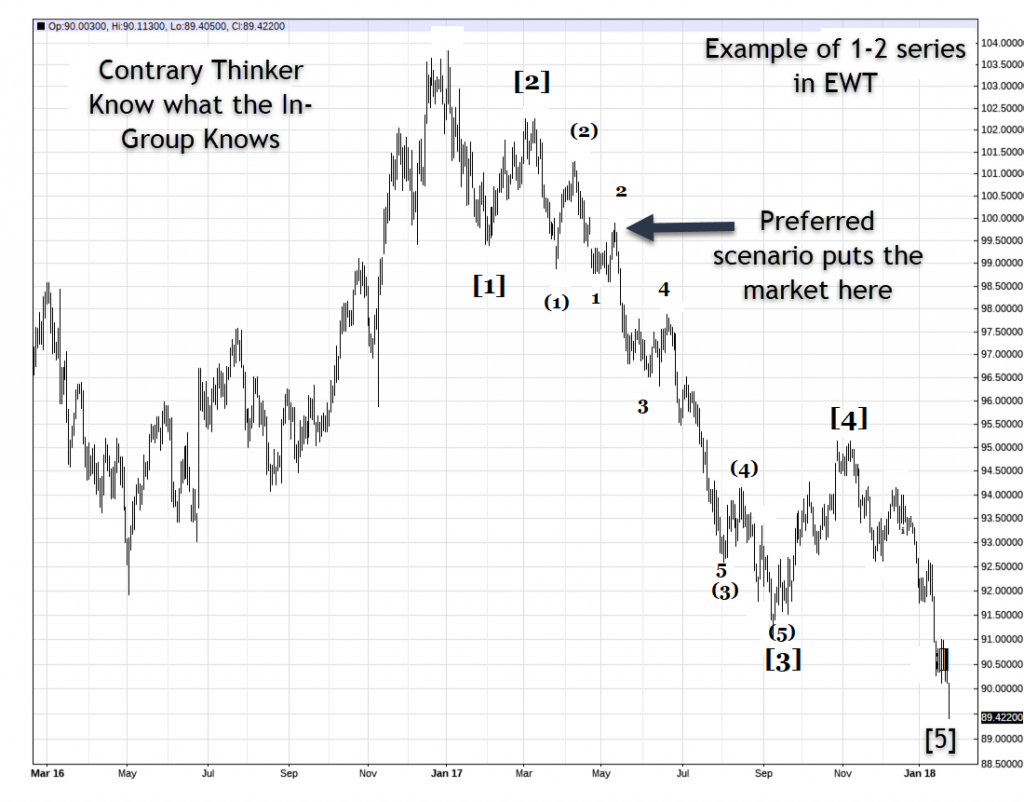 There is no need to go into how each wave fits via Fib ratios to each other. But I will point out that the counter-trend from the June 16 low has traced out a near-perfect a-b-c counter-trend, where c=a and the retracement hit resistance near the .382 level of the entire decline. 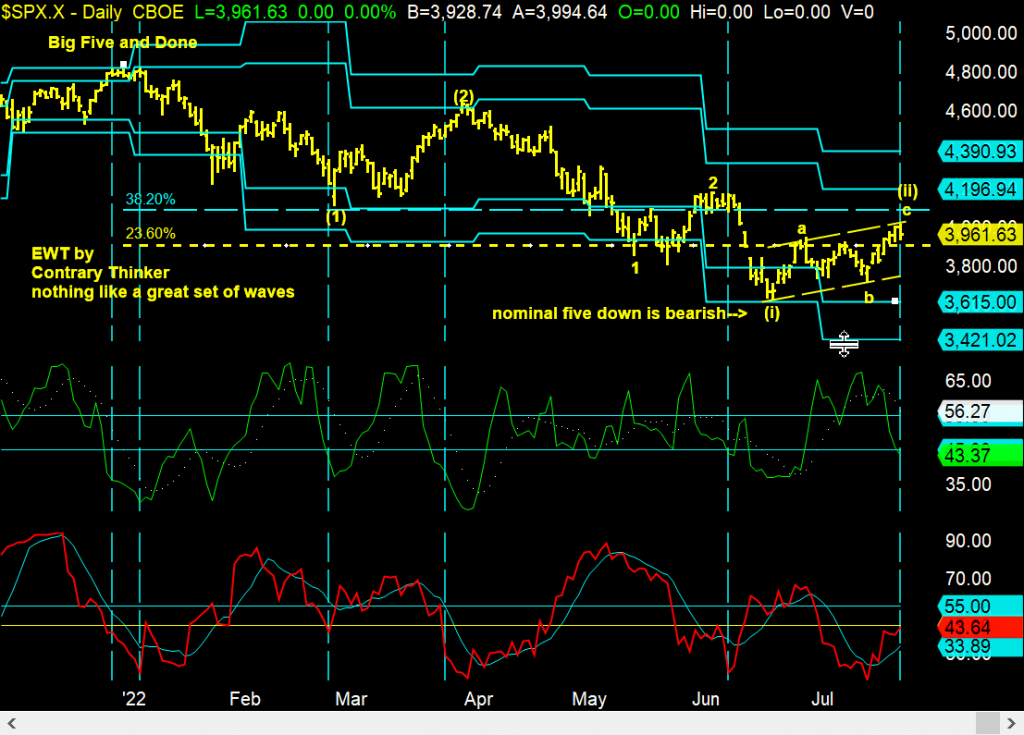 The author is confusing the market with the outside worldly causes the media would focus on. Be that as it may, he has not hit the extra-market risk that would be blamed for a further market decline.

Here is what could be the catalyst of a major problem in the USA.

“As the January 6 Committee hearings reveal shocking evidence about Donald Trump’s efforts to overturn the 2020 election, pressure is mounting on Attorney General Merrick Garland and the Department of Justice to prosecute the former president. The public conversation has revolved around what are often thought to be two competing interests: Garland’s efforts to depoliticize the DOJ and his duty to uphold the law…”

“…There is no doubt that prosecuting Trump will be deeply divisive in the short term. It will exaggerate partisan divisions and likely lead to political violence. But not charging him will be worse. Letting Trump’s actions go without even an indictment would establish that laws don’t apply not only to sitting presidents but to former ones as well, enshrining them as somehow above the average citizen. Such a de facto acquittal would forever undermine the rule of law and tarnish the DOJ.

The prosecution of a former president should be uncomfortable for any attorney general acting in good faith. But the nation’s premier law enforcement officer shouldn’t let discomfort distract from duty. The sanctity of the electoral process is at the heart of a democracy. Defending the ballot, Congress, and the nation from attack should be the highest goal of the attorney general, integral to their oath to defend the Constitution. Prosecuting those who attack democratic institutions, no matter what office they once held, is the best way to restore the dignity and independence of the DOJ.”