If irony evades you, you are in the majority, heads up.

Contrary Thinkers know,” the market programs the investor to do just the opposite of what he should be doing.” Contrary Thinkers also know that investors are not hard-wired to fail at achieving alpha, like so many others, would like you to believe. Its all a matter of being a Contrarian. END_OF_DOCUMENT_TOKEN_TO_BE_REPLACED

Bull market peaks that occur in December or January produce a seasonal pattern that repeats itself…Based on this seasonal pattern, if we see a top here in the middle of January, it will be followed by a series of Annual size One Day declines culminating on August 8 and October 19 with panic days caused by national security threats. pg3, issue #1

Today, the breakout by implied volatility on the Russell will continue, after this pause, the market – along with the others, has at least a deep test of the most recent low instore. In this L-T chart, you can see how the market followed through lower after the initial surge by %BB-VIX. 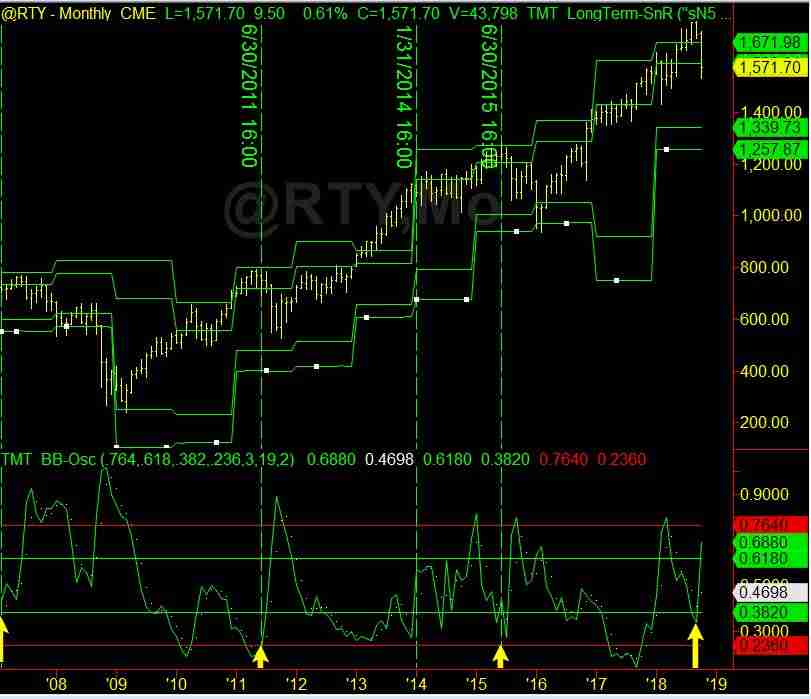 The other factor here was the feel of the panic low when it happened on October 11. It did not have the same unabashed smell of fear at the bottom. That comes from experience, but from an empirical point of view, the media was not screaming blood in the streets as they did in February and like all another critical low. Instead, it had that unassuming no one is paying attention first leg down of a bear market.

The TEM – as “Volatility Reports” pointed out – did reach a panic low reding. Our investors and traders can take such an event to the bank on a short-term basis it will lead to a choppy market until the next TE, same way as saying the background permits a change of trend.

— Thinking Man’s Trader does not assume the risk of its clients trading futures and offers no warranties expressed or implied. The opinions expressed here are my own and grounded in sources I believe to be reliable but not guaranteed.

–Thinking Man’s Trader does not refund policy all sales are the finale.

NO WARRANTY / NO REFUND.TMT MAKES NO WARRANTIES, EXPRESS OR IMPLIED, On ITS PRODUCTS AND At this moment EXPRESSLY DISCLAIMS ANY AND ALL IMPLIED WARRANTIES OF FITNESS FOR A PARTICULAR PURPOSE. IN NO EVENT SHALL CBI BE LIABLE FOR ANY DIRECT, INDIRECT, SPECIAL, OR CONSEQUENTIAL DAMAGES IN CONNECTION WITH OR ARISING OUT OF THE PERFORMANCE OR USE OF ANY PORTION OF ITS PRODUCTS.

Just like any relationship, anniversaries are important to the market, and many traders know it may cost them if they do not recognize these occasions. As a nation, there are days we will not forget, like 9/11. Just like a rock thrown into a still pond, the effects repeat over time.

The same big splash effects happen in the market, and it does not forget. Since 1885, some ten major DJIA AOD falls (≥ -3.60%) occurred between September 10 and October 31.  These are sizable price events. 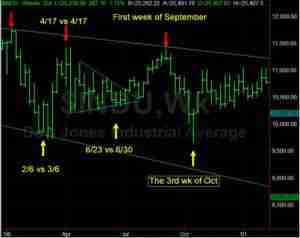 There are many more than ten referred to above when you consider declines in the one-day class that are less than the 3.6% but happen with a negative geopolitical news or media event.

MarketMap draws many parallels to the 1972- 1974 period based on the events from 1973 (9-year cycle x 5) this week is the anniversary of the “Arab oil embargo” among others in the 9-year repetition.

While MarketMap came into the year headlining “Geopolitical Security threats will precipitate financial distress” it is noteworthy that the real-life headlines read “Saudis threaten retaliation after Trump warns of ‘severe punishment’” for the suspected killing of a self-exiled Journo, Jamal Khashoggi, one of Saudi Arabia’s most prominent journalists.

However, what has become the new normal in the last 18 months is nothing ever happens, the problems simple pill one on top of the other.

However, cathartic market action in the current timeframe may lead to a clearer vision of what the future has in store.

The dates that come up for an AOD fall are today, the16th or the 17th. They set up as panic days from open to close. The longest bar of a move tends to be the last bar of that trend. The long weekly bar that ended the move in 2000 was 6.2% the one that precedes it was 5.8%, for example.

Thus far, since the October 3 peak, the biggest decline is only 3.2%. Exceeding that daily range will suggest a low is nearby, and MarketMap will look for cross-checks to confirm a low. Also of note here, the AOD decline in February was 6.9% and in a period of great extremes, in this era of the “tremendous” where anything is the “probably the greatest ever done,”  and after 2017 a year of the lowest volatility on record, expecting an AOD decline exceeding the 6.9% this week would not be a surprise.

The scenario has not changed: risk/reward favors selling with selective long V hedges. A low here in the latter half of October followed by a failed rally into the election with another decline into the COT dates mid-November. There is the potential of an alternate or second AOD decline hitting on or about November 23.

My work advances the EWT Rule of alternation and builds on the way Robert Farrell understands the unexpected nature of the market. An understanding that made him the top-ranked institutional market analyst on Wall Street for 16 years.

In EWT the rule considers the nature of the alternating corrective waves if the first correction is simple the second one is expected to be complex and vice versa.

This simple notion breaks the linear mindset, a trap for traders and advisors alike.