“Ninety Nine Cents Won’t get you into NYC…”

“…it takes a Dollar.”  The freedom dollar.

Fourteen years after the secular low, nearly everyone is stuck in the noughties and in love with the one-way traffic of 2017.  They – bulls without fear – have taken hook line and sinker the green back’s market relationships as the king of all fiat currencies will be superseded by digital tokens, gold/silver, that inflation will benefit the Euro and other currencies like the emerging market currencies as well as the world equity markets.

This mob cares little about the dollars buying power, I mean who would? Seriously, when you can invest in risk assets? Old money perhaps, smart money maybe, you think? 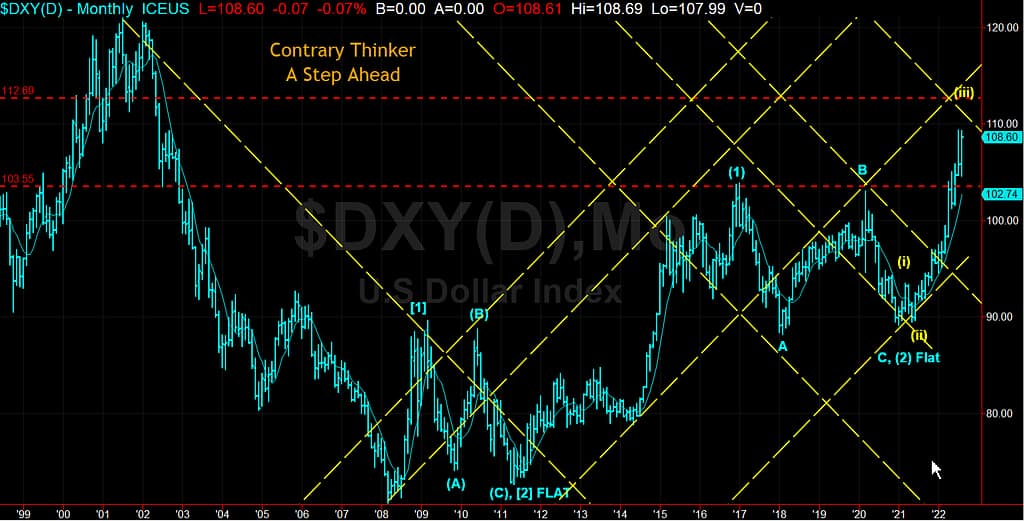 The various backstories are interesting. The long-term dollar bulls see the international flow of funds exiting offshore looking for economic strength in the USA relative to the weakness of the EU, China, and PacRim. More so they see Europe as ground zero for the fascist-populist revolt with an insurrection wave headed at central bank leadership.

As stated previously, to the chagrin of a few, the economy competes with the stock market for the same dollar. Today we are witnessing a real economic expansion not just a “paper chase.” The international flow of funds will favor the US and its new fiscal policy and its Regime change from a top-down to middle-out economic policy out of DC, which will sustain.

Why? Because youth will be served.

Moreover, the Euro and the EU are a confederation of countries banded by common values and objectives but separated by different languages and cultures. If you think the State systems in the USA are perplexing,  do some comparative work between Poland and Spain, Etc.

The above chart is super bullish based on the “rule of alternation,” which says in EWT that corrective patterns of the same degree have to be different. In general, in life, this rule applies in that the most recent battle will be different from the one before it. In 2007-08 the bears expected a reply of 2001-03, it was too fresh. Today the bears think in terms of the 2007-09 stock market experience, it will be different compared to that most recent history.

In the above chart, the corrections from points [1] to [2] compared to the correction from points (1) to (2) are the same, they are flat ranges. Hence the second correction must be of a lower degree setting up a massive third wave advance in a new secular bull market in the not too distant future.

So the current rally from just below 90 – from point (2) – is a short-term wave 1 that is still unfolding with a break above 110 likely. As stated and well-known among traders, a break of round numbers in virgin territory typically leads to more trends in the same direction.

The chart-window on the right shows the wave count of the dollar setting up for at least one more run to new highs in wave “v.” The chart on the left shows the market in Short-Term resistance and just below I-T resistance, the latter running from 109 to 111.10.  The rally from 105 was supported by TE#2 and has reached a new TE#3, slowing the advance down.

Rule #3 calls the trend old, low energy but persistent. While due for a change, the uptrend could persist.  The monthly and weekly chart (not shown) supports a more persistent trend. 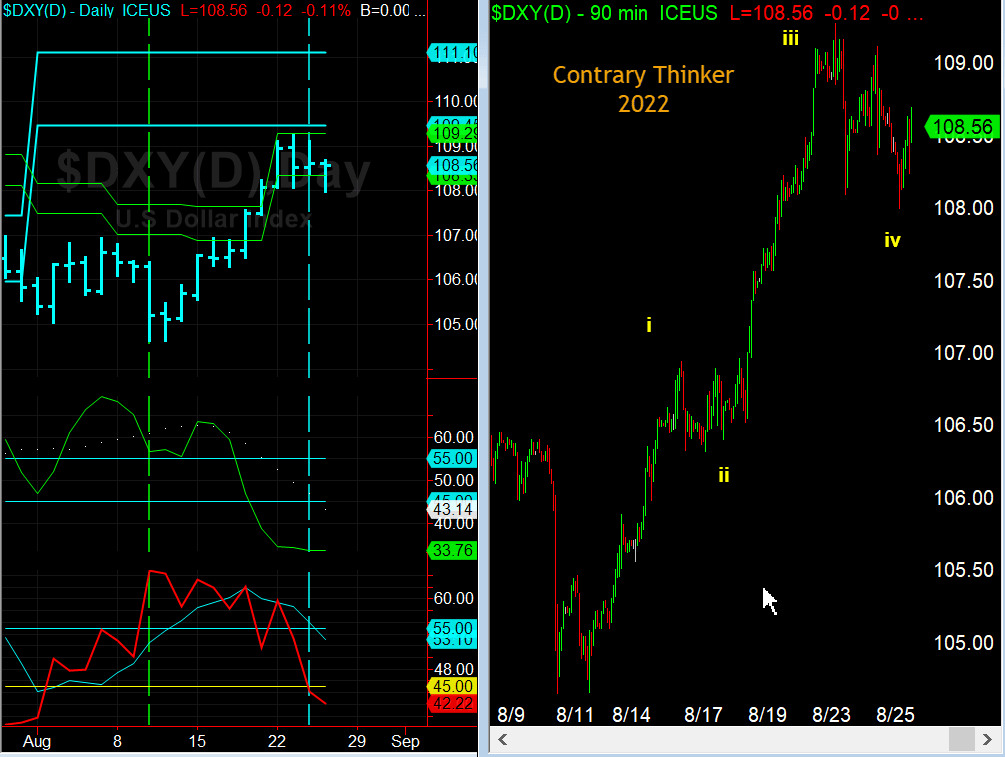 On a short-term basis, either the market is going to “persist” through 110 into a COT due early next week or consolidate between the 104 to 109 level until TEM sets up for a more dynamic move higher, and the COT becomes low. For the FX market, the number of soft cycle changes that are due in early September suggests more rally from here into 9/3/22.

From a trading point of view, I see nothing to trade until the Dollar makes an S-T top, the USD/JPY still looks bullish as well.  The Aussie dollar may finish out an ending wedge for a nice counter-trend rally. At this point, it’s waiting to see. However, the risk markets are looking vulnerable, because that group does not like the dollar at higher levels.