Rate frustration coming to an end

The 10-year and 30-year are breaking down

Bonds are coming off another S-T pivot high – triple tops plus one. This peak, however, was set up like the two peaks preceded by low perceived risk. The decline thus far has not increased perceived risk based on the CBOE data, as bond volatility has remained oversold.

Three more reasons to be bearish on T-bonds.

1. A big top was established with the monthly head and shoulder’s top.

2. True North strategy on a short and intermediate basis is short the markets.

3. The volatility background sets up like previous I-T peaks is followed by nice declines.

Our volatility model – the Technical Event Model – on both S-T and I-T  provides a background that supports a high rate of change trend, given the above our bias is to use short selling strategies.

Dump Stocks after the Election

“American’s should be very concerned and pay attention,” Bob Woodward, author of Fear-Trump in the Whitehouse.

Besides being a dyed-in-the-wool capitalist, I am an ardent independent voter as in R. Reagan/B. Clinton, so I feel fine publishing this brief. I have some nagging voices from the 1950s rule not to mix politics and business, but the observation here has no political bent.

My analysis has more factual foundations than popular conspiracy theories like the Lizard People, aka “Reptilians,” are Running the World, or the Attacks on 9/11 was an inside job, etc.

Along with the mollycoddling of the younger generations not to be afraid of risk to the arrogance in the pundit’s bullish pronouncements, I feel vindicated speculating about the powers that rule on Wall Street.

In 2007 it was clear to almost everyone that it was time for a white house change. Traditional thinking was the Republicans could not win in 2008 because a two-term administration seldom wins a third term for the same party.

Well, the Dems sense that as well, and on February 10, 2007, Barack Obama, then junior United States Senator from Illinois, announced his candidacy for the presidency of the United States. Along with Hillary Clinton, the polls did not look good for the Party of Bush.

Some say the powers that the Treasury’s connections to Wall Street in 07 pumped the market up in 2007 in the face of the growing sub-prime debt bubble to dump the news events going into the 2008 election. Their goal was dumping a bear market, one that turned into the WFC,  in the lap of the Democrats, believing if not hoping the Dems would not be able to deal with it. They almost got their wish.

However, in 2008-09, in the face of the calls for austerity by the Tea Party, the Dems used centralized sequestration, engaged socialism for big biz, and bailed them out. Yes, centralized ownership of banks and companies “too-big-to-fail” that brought an end to the WFC along with the Fed’s QE.

Well, the same Wall Street power faction may be in the play again today. With one clear goal. They know they cannot win in November, and the Trump Republican Party will be under attack from at least the lower house of the Congress with signs from current polling and Senator McConnell that the Senate can be taken back by the Democrats.

So the question is, can the “powers that be” (PTB), feeling their power coming under threat,  keep what remains of the bull market pegged at these higher levels? Because to help Republicans stay in power, the economy is the only positive factor they have to sell in the mid-term election.

Given Trump’s dismal approval ratings of 32-35% and declining, the market should be declining now in expectation of the regime change, and it is not.

Given the evidence’s weight, a secondary peak after the January 26 high should be happening in the current time frame, yet they (PTB) have the averages on a trade war yo-yo.

Now they are trying to push through more tax cuts to encourage more share buybacks to keep the market inflated.

At this late stage in the recovery, another tax cut would be like putting gasoline on the barbeque, again.

They plan to deflate the market – pull the pegs – after the November election when the Democrats win, giving the Republicans an excuse for the market hitting the skids. They can blame the Dems and use the market as their issue in 2020. 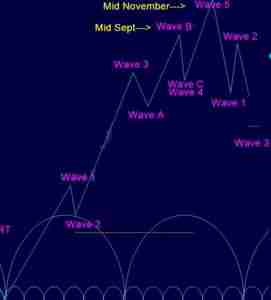 Since January 2018, there has been a very clear sign of a market top; we published the sell signal on the 26th of January.

My bearish view was joined by Morgan Stanley in early August 2018 when the headline was “Morgan Stanley: The biggest sell-off since February is coming, and it’s going to hit the average investor hard.”  Today, Ray Dalio’s Seven Bubble Indicators Are ‘Flickering But Not Flashing.’”  I am in a position to say they are flashing. I will post them on the blog shortly.

The majority of analysts point to the A/D line in gear at the new highs and a perfect leading indicator of a top. Hence without the divergence, there cannot be a top.

What they miss, along with coincidental A/D peaks like January 26, 2018, among other issues, is now out of gear the S&P sectors are; and how it is only a handful of sectors at best that is holding up and forcing new highs.

What the majority is overlooking is the emotional state of who invested in 2017. This is one of the key factors in Ray Dalio’s Seven Bubble Indicators, has new a new group of buyers entering the market?  Without a doubt.

Our volatility measures show that from April 2017 into the January peak, the buying was based on FOMC. The Technical Event Model was in a sustained period of panic buying. Something that is normally an event, not an ongoing condition. These late-cycle buyers will flip out at the first sign of pressure on their account balance.

In fact, the February decline stopped right at their break-even level of these FOMC players; and from a long-term point of view, our targets for the bear take prices back the surprises Trump win in late 2016.

What else is clear in a casual and random viewing of the financial news is two overwhelming ideas everyone with airtime agrees.

There is no reason to sell now because there is no clear reason to do so, and two, the clear reasons to sell are well outlined by them – whatever their rationale happens to be- but these events will not occur until 2019!  Literally 90% of everyone you hear on the major financial news networks.

The problem with playing along with the “one for all and all for one” consensus view of 2019 is when the trend does reverse, it will be every man for himself. When their systems give a sell – you need to understand all of the systems are subject to hyper-correlation – the majority will be hitting the door simultaneously, leaving the historical decline of 1987 far behind as new records are created.

“The idea of record-breaking will continue in the headlines in 2018. It is only common sense to know this.  In each bull/bear cycle since 1974, there have been record-breaking price events. Each bull market has been bigger, better, and greater than the previous. Each new period contained record-breaking events from the number of consecutive higher close days to the most significant one-day advance in history.

The same has held for the bear market cycles.

Since 1974 I have never joined the doom and gloom mob calling for 1929 and worse.

However, both fiscal and monetary policy has painted America’s economy into a corner, a corner that has no alternatives that are positive to bail out the market and the economy when the next down cycle occurs.”

Since my pronouncement, the debt situation has become worse. The Treasury Department says the government is on track to have a total budget deficit of about $850 billion in the current fiscal year that ends Sept. 30, and the Congressional Budget Office predicts a budget deficit of just under $1 trillion in 2020. The market is in a debt bubble that is widely recognized and just as widely ignored, and as I stated above, the majority of pundits and media forecasters are postponing the day of reckoning into 2019, 2020.

I will simply repeat what I said 9 months ago; there will be no way to support the next downturn with tax cuts and spending programs due to a pre-existing Trillion-dollar funding need.

Majority of Sectors Topping Out

Except for a very few, the vast majority of sectors and the leading FAANG sector is topping out

END_OF_DOCUMENT_TOKEN_TO_BE_REPLACED

The Dow 30’s inability to make new highs leaves it as a major non-confirming index.

END_OF_DOCUMENT_TOKEN_TO_BE_REPLACED

Continued Weakness Offshore Leading the US and Canada

The ETF of offshore market EFA is following the Chinese market with a leading diagonal triangle, a bearish chart formation.

END_OF_DOCUMENT_TOKEN_TO_BE_REPLACED

A Shift in Mood Forthcoming

Change of Trend (COT) dates from several independent studies are clustering in the current time frame. It is more than a random outcome. For one reason, the fractal method I use for diverse markets has a pivot – a COT-in the very near future.

Like volatility, these time windows point to a dynamic change in direction for the basket of commodities in this chart, “Bloom cmd map 2018.” When I look at the same fractals for Crude, Gold, and Silver, I see the same expected change.

The first two charts are overlays for the 18 1/2 year cycle.

History doe does not repeat itself exactly, but it does have a rhythm. According to the 18 1/2-year cycles, the timing of market events should be similar to the year 2000. Thus far in 2018, the dates are lining up with confidence. Looking at 2000, that model would suggest the next six weeks to be a sell-off of some proportion.

The 2018 chart labels the dates for the visual cross-check. What is a new price-based event os the crossover of the 50 and 200-day moving averages, nicked named the “death cross.” It provides trend followers with evidence of an estimate bear market.

Based on the current context when the sell-off does hit, there will be no fanfare beforehand. And when the indicators give clear sell signals to the big boys, the sell-off will be a high rate of change affair that exceeds the spill in February. As such it will be very profitable for long volatility strategies.

The number of long-term sell signals is mounting to go along with these COTs. True North on the majority of important sectors and all of the indices, is out of the market and suggests the engagement of long volatility strategies.

Rare TD sequential sell signals are hitting the major indices as well. The TDS long-term sell signal chart shows how the count succeeded in nailing the peak in 2017 and has given a 13 count sell signal in January, from which the market has not been able to recycle.

The outlook has not changed on the stock market, just waiting for the other shoe to drop. While there is another COT date on the 8th, the expectation has been for a mini panic low in the first two weeks of August, no change.

END_OF_DOCUMENT_TOKEN_TO_BE_REPLACED

My work advances the EWT Rule of alternation and builds on the way Robert Farrell understands the unexpected nature of the market. An understanding that made him the top-ranked institutional market analyst on Wall Street for 16 years.

In EWT the rule considers the nature of the alternating corrective waves if the first correction is simple the second one is expected to be complex and vice versa.

This simple notion breaks the linear mindset, a trap for traders and advisors alike.